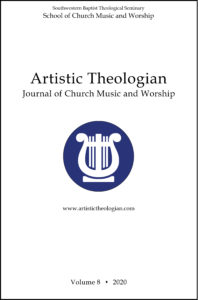 Purchase a Print Copy at Amazon.com

Editorial: As We Worship, So We Believe

This fictional story represents the liturgical story of the Christian faith, well illustrating the dynamic, formative nature of the relationship between religion and worship.

Does God Inhabit the Praises of His People? An Examination of Psalm 22:3

“God inhabits the praises of his people.” In recent years church leaders across a broad spectrum of Christianity have commonly encouraged their churches with this exhortation. This phrase is often presented as an encouragement for congregants to intensify their participation in the gathering so that they may further experience God’s tangible presence. Yet, clarity must be sought in understanding the meaning of this phrase and its context in Scripture.

Further investigation into the use of this expression and its origins reveals Psalm 22:3 as the source. The King James Version renders this verse as: “But thou art holy, O thou that inhabitest the praises of Israel.” Others translate it more like the NIV: “Yet you are enthroned as the Holy One; you are the one Israel praises.” Just a cursory glance at these two different renderings begins to reveal some of the ambiguity in translating this text. Beyond issues of translation arise matters of exegesis and hermeneutics.

The purpose of this paper is to examine Psalm 22:3 in its canonical and historical context to give an Old Testament framework for understanding God’s enthronement and presence in corporate worship and to provide implications for the practice of worship in a new covenant setting. Furthermore, my aim in writing stems from a desire to uncover a biblically faithful interpretation and application of a passage that has frequently been cited to overemphasize the responsibility of the worshiper in corporate gatherings. A survey of the works of many prominent writers of previous decades reveals the evident belief that God is present in a different way because of his people’s praises.

This study opens with a synthesis of contemporary applications of Psalm 22:3 as found mostly within the Pentecostal and Charismatic movements. I will then present an exegesis of this passage, beginning broadly with the Psalms and narrowing to verse three in its context, leading to an examination of the Old Testament concept of God’s enthronement as it relates to his presence. Finally, I will provide implications for the use of Psalm 22:3 in the context of contemporary worship under the new covenant. Throughout this paper I argue that although many modern Christians have understood God’s enthronement on the praises of his people as an anthropocentric idea of man’s responsibility in worship, a more faithful interpretation emphasizes God’s sovereign rule and reign over his covenant people as the central theme of Psalm 22:3.

Love for Christ and Scripture-Regulated Worship

Two streams concerning worship diverged from the headwaters of the Protestant Reformation. For Luther, a church may worship with any element not forbidden in Scripture. This is typically called the “Normative Principle of Worship.” Besides Lutherans, Anglicans and many evangelical congregations hold to the Normative Principle. Such churches would permit for extra-biblical acts such as incense, drama, or dance as part of their liturgies.

Calvin and Zwingli advocated for a second approach to the elements of sacred worship. They and their heirs have argued that Scripture alone must regulate our worship. The expression was Quod non jubet, vetat—what he (God) does not command, he forbids. That is, it is not enough to avoid those parts of worship that the Scriptures forbid, but believers may only include in their worship those parts of worship that Scriptures command. This understanding of the relationship of Scripture and worship is often called the “Regulative Principle of Worship.”

The Union of Theology and Doxology: A Comparative Study of Jonathan Edwards and Anne Dutton

The simultaneous existence of the Age of Reason and the Age of Piety during the eighteenth century stands as a great historical paradox. Although it was an age marked by distinct inclinations toward science, logic, and human reasoning, the era also witnessed theologians and authors whose works expressed heightened levels of reverence, devotion, and religious experience. This study will provide a doctrinal and literary interaction between two such authors: Reformed pastor and revivalist Jonathan Edwards (1703–1758), who provided one of America’s most prolific and impactful theological legacies, and Anne Dutton (1692­–1765), a British Particular Baptist and pastor’s wife who voiced a lifelong mission to point others to Christ through her extensive theological writings in the form of treatises, poetry, hymns, and personal letters.

A comparative study of the two theologians will offer a new perspective on spiritual writings during the Evangelical Revival and a new way to contemplate Edwards, especially since Dutton is under-researched. Like Edwards, Dutton faithfully proclaimed a staunch defense of Calvinism against various Arminian doctrines that she deemed objectionable and “nurtured the distant American awakening” through her vocation of religious writing. As will be seen, for an eighteenth-century Baptist female author to have published works with a theological depth and acumen that could withstand a comparison to Edwards was remarkable and extraordinarily rare. Accordingly, the establishment of specific connections and correlations between Edwards and Dutton would be a useful and compelling addition to eighteenth-century evangelical research.

In this paper, I will argue that Jonathan Edwards and Anne Dutton display a notable similarity of content, depth, and intensity, both in their doctrinal writings of theology and in their devotional language of doxology. Their shared use of rhapsodic language to express their experiences of the divine, along with the parallels of thought found within their theological treatises, will clearly indicate a remarkable, compelling likeness and connection between Edwards and Dutton.

Beauty is integral to Christian worship. Christian worship, spirituality, and spiritual formation can be said to be in pursuit of beauty. The psalmist states that his “one desire” is the perception of God’s beauty (Psalm 27:4).

The neglect of beauty within Christian liturgy and practice in the last century have had visibly negative effects on Christian worship. Concessions to the Enlightenment pursuit of value-free objectivity have produced a less fruitful era for Christian expression in terms of music, poetry, literature, architecture, and the plastic arts.

Perhaps some of the difficulty in restoring beauty as a deliberate aim in worship is the absence of an agreed-upon definition of beauty in the Christian world. True, beauty is far more than an abstract idea; it is a quality to be embodied. Defining beauty conceptually is just the beginning of pursuing beauty. Such a definition is, however, a very important beginning for practical ends. A working definition of beauty and God’s beauty can be used by pastors, teachers, and worship leaders as they seek to disciple God’s people in corporate and private worship.

A definition of beauty or the beautiful has eluded the grasp of those who wish a definition with mathematical precision. This more than two-millennia-old discussion remains open, and no definition has satisfied its perennial participants or become the final word.

Few theologians in the Christian tradition have given as much attention to defining beauty as Jonathan Edwards did. Pseudo-Dionysius, Augustine, Boethius, Thomas Aquinas, Bonaventure, Hans Urs von Balthasar, and Von Hildebrand all deserve honorable mention, but Edwards remains peerless for the emphasis he laid upon beauty, and for the explanatory power of his definition.

The sheer volume of writings on beauty, from antiquity to the present day, is enormous. Christians of the last 1900 years have added to this store when referring to beauty while expounding theology, spirituality, or some form of apologetics or philosophy. Synthesizing the competing views of beauty is a herculean challenge.

What is being formed in hearers as we use language in corporate worship? Does it matter how we speak in and of the Lord’s Supper? What is happening when the words “This is my body” are spoken in a congregation? Dan Block makes the bold statement, “The Lord’s Supper is the defining ritual of the Christian community.” One approach to examining language in this defining ritual is by using the tools of speech act theory, especially the tool of the category of liturgical speech acts.

Though evangelical theologians have primarily used speech act theory (hereafter SAT) for hermeneutics, SAT has usefulness for examining the performative speech of corporate worship. SAT was originally conceived by J. L. Austin and further articulated by John Searle. Primarily, SAT focuses on the intentions of the speaker, or what one does with words. SAT is framed by the concepts of locution, illocutionary acts, and perlocutionary effect. Liturgical speech acts are one way of construing SAT for examining the language of congregational worship.

Searle’s original taxonomy of illocutionary acts consists of five ways of speaking. An Assertive act makes a claim about the world. A Directive act is a command that seeks to match the world with what is said (“Close the door”). A Commissive act is one in which the speaker commits to make the world match the words, such as in making a promise. An Expressive act simply expresses an internal state of affairs. Finally, a Declarative act brings about a new state of affairs to fit the words with the world (“I now pronounce you husband and wife”).

The Lord’s Supper, or Table, is the third movement of the historical ordo—Gathering, Word, Table, and Sending. The Supper is part of a tapestry of liturgical speech acts and embodied actions in corporate worship. As David Power comments, both baptism and the Lord’s Supper “are interwoven with institutions, lives, histories, personages.” Power’s language aligns with two supplemental categories of speech act theory: “institutional facts” and “constitutive rules.” The Table elements are shaped by institutional facts, constitutive rules, and the denominational traditions that manifest these conditions of performance.

Begbie, Jeremy. Redeeming Transcendence in the Arts: Bearing Witness to the Triune God (I. Yeung)

Stonestreet, John. A 30-Minute Overview of a Practical Guide to Culture: Helping the Next Generation Navigate Today’s World (B. Thomas)