A 30-Minute Overview of a Practical Guide to Culture: Helping the Next Generation Navigate Today’s World, by John Stonestreet 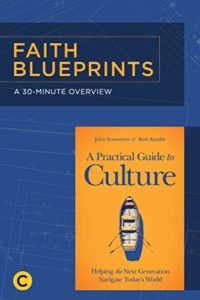 This short ebook provides an overview of a longer book that John Stonestreet co-authored with Brett Kunkle. It is part of the Faith Blueprints series designed to give executive summary-type coverage of the main points from what the publisher says are “some of David C. Cook’s best books” so that people can “learn from some of the world’s best thinkers on the subjects of faith and culture” without having to read the full-length versions. Stonestreet, President of the Colson Center for Christian Worldview, and Kunkle, a former pastor, both speak and write about faith and culture. Al-though it is authored by Stonestreet, throughout the ebook he speaks on behalf of Kunkle and includes lengthy quotations from the book they wrote together.

The ebook is divided into four parts: “Why Culture Matters,” “A Read of the Cultural Waters,” “Pounding Cultural Waves,” and “Christian Worldview Essentials.” The authors’ target audience is Christian adults who want to help young people “navigate this cultural moment as champions for Christ” (loc 166). As the title and two of the sections indicate, the authors liken culture to water. However, they float from one water analogy to another, which makes it difficult to catch a definition or consistent description of what they mean when they use the word culture.

The title and cover suggest that culture is analogous to a body of water that needs to be navigated by boat. However, within the ebook they depict culture as water in which people are trying to survive “cultural currents” that have “shifted and intensified” and “brought a tsunami of change” with “one issue after another after another [that] hits us like a series of waves at high tide” requiring people to “keep their heads above water” (loc 152). Elsewhere, they shift the analogy to that of culture being our natural habitat when they write, “Culture is for humans what water is for fish: the environment we live in and think is normal,” and “Like fish immersed in water . . . culture shapes our perceptions of reality” (loc 217).

Most of the ebook is about teaching young people to not succumb to the pounding cultural waves of unbiblical ideas and practices regarding pornography, sexual orientation, gender identity, consumerism, addiction, and entertainment. Toward the end, the authors admit that they “have been talking mostly about defense” and they then pivot to offense when they write that “We’re also called to be faithful ambassadors to the culture” (loc 3635). They suggest accomplishing that by engaging culture in order to influence it for good because “When mature Christians engage the culture fully, deeply, and wisely, the culture won’t corrupt us. . . . We’ll teach it what is good, true, and beautiful” (loc 759).

The authors point to God’s Word as the source for what is true, but they do not elaborate on what constitutes good or beautiful. Other parts of the ebook lack needed explanations as well. For example, they recommend that young people read good books but do not define what qualifies as a good book.

In addition to inconsistent water analogies and the lack of needed explanations for certain terms and statements, another shortcoming is their use of culture and world synonymously in the title and throughout the ebook. One example of this synonymous use is when they write that they “dream of the day our kids will wade out into the culture and impact the world for Christ” (loc 143). Another example is when they state that unless we examine “the culture around us, it won’t occur to us that the world should be any different” (loc 217). Using culture and world synonymously brings vagueness and imprecision to terms in need of clarity and distinction.

Related:  Worship on Earth as It Is in Heaven by Rory Noland

While this ebook is useful on its own for highlighting the authors’ main points, it lacks clear explanations of key terms, such as good, beautiful, world, and culture, which are crucial to the topic the authors address. For those trying to decide if the overview or the full-length book could be useful to or for them, the concluding ebook paragraph that suggests Christians should “deal with the ideas, institutions, trends, fashions, and habits of our culture” by celebrating “beautiful art, brilliant ideas, and compelling stories,” creating “new policy solutions and clever inventions . . . to solve contemporary problems,” confronting “lies, slander, and false religions,” co-opting “new technologies . . . for kingdom use,” and correcting “false information and misperceptions about others” (loc 3673) provides insight to how the authors perceive and approach the topic of faith and culture.