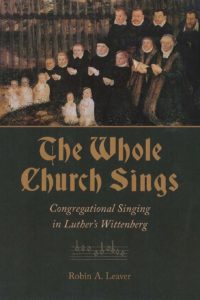 Martin Luther facilitated many changes in the liturgical practices of congregational singing, many of which Protestants still use in worship today. Robin Leaver, professor emeritus at Westminster Choir College and visiting professor at Yale University and Queen’s University, Belfast, Northern Ireland, discusses what was happening musically within the church when Luther began instituting his reformation concepts. Lutheran studies often focus on the 1529 Klug Wittenberg hymnal as the first hymnal utilized by Luther and his constituents. However, Leaver’s thesis is that Wittenberg churches employed vernacular congregational singing before then, citing hymnals and documents in circulation before this time, namely the 1526 Enchyridion.

Leaver delves deeply into the contents of hymnals published within the decade after Martin Luther posted his theses at Wittenberg, referencing numerous developments in hymn printing during the 1520s and 1530s. Leaver states the importance of the omission of the Enchyridion from other Lutheran studies and attributes much of the success of hymn preservation and renewal to this publication. As his research shows, there were many developments occurring around Luther’s Wittenberg at the time of the Reformation, and hymn singing was a natural development within Luther’s reforms. An influential poem that Leaver references early in the book is Hans Sachs’s “Die Wittenbergische Nachtigall” (“The Wittenberg Nightingale”), dated July 1523 (45). He challenges the idea of the omission of this poem from other Lutheran studies and states its importance in supporting and expanding Luther’s worship reforms.

Related:  A 30-Minute Overview of a Practical Guide to Culture: Helping the Next Generation Navigate Today’s World, by John Stonestreet

The focus of Leaver’s research lies mostly between 1523 and 1526, through which he compares numerous printings of hymn publications, including those printed both individually and in hymnals. He provides a brief discussion of musical happenings outside of the church in Wittenberg during the early sixteenth century, focusing on the oral folk-song tradition, especially the style used by the Meistersingers. This discussion transitions into Luther’s theses, which led to the publication of many liturgical reforms issued by others around Wittenberg from 1517 to 1523. One of the sources utilized in Leaver’s research is Luther’s publication of “En neues lied” in 1523, the hymn considered to be Luther’s martyr song and the inspiration of vernacular hymnody. Due to this publication, Leaver asserts that congregational singing was active in Wittenberg beginning in 1523 (162).

Leaver highlights the Meistersingers’ use of bar form in their oral singing tradition, which Luther also used in his hymn writing because he wanted to give his hymns a “receptive hearing” (60), especially in his early hymns. When Luther was purporting the inclusion of vernacular hymnody, he sought competent poets that could clearly articulate accurate theology (69). Leaver points out that Thomas Müntzer fit this category, and a few of Müntzer’s hymn translations were printed in either 1523 or 1524, a time when Luther was also actively translating Latin hymns into German (85). Through their combined efforts, vernacular hymnody was established in Wittenberg and slowly started its expansion throughout the country with the aid of broadside printing. Leaver cites particular hymns, often with tune names, printed in specific hymnals throughout this time. Leaver also discusses Johann Walter’s Chorgesangbuch of 1524 in detail (97) and uses it as comparison for many following hymnal publications.

Related:  Worship Changes Everything: Experiencing God’s Presence in Every Moment of Life

With the publication of the Enchyridion in Wittenberg in 1526, congregational singing began to be strongly emphasized (104), as opposed to singing solely from the minister or choirs. Leaver details the hymns included in this volume and compares it with the Chorgesangbuch, stating the Enchyridion was created for the congregation and the Chorgesangbuch was created for the choir (106). Through further analysis, Leaver states that the 1526 Enchyridion refers to two earlier printings of a similar hymnal, meaning that Wittenberg congregations were most likely participating in congregational singing as early as 1524 (116). This research affirms Leaver’s thesis that Wittenberg churches had already been introduced to vernacular congregational singing by the time of the printing of the Klug Wittenberg hymnal in 1529. He offers numerous helpful appendices that show Luther’s hymn publications in specific hymnals (Appendix 3), as well as a list of hymn collections printed from 1524 to 1536 (Appendix 5).

Leaver continuously provides historical proof to support his thesis and leads the reader on a journey through his research. He is consistent with his analytical methods and clearly states the need for his research, citing the deficiency in previous Lutheran studies. This book is ideal for researchers wanting to know more about contextualization of Luther’s liturgical points of the Reformation as it examines numerous publications that have not been mentioned in other research documents. Leaver’s research is thorough, concise, and contributes greatly to the study of congregational singing at the time of the Reformation.