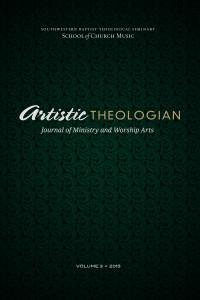 God’s revelation is the basis and foundation of everything in Christian life and ministry. God’s inspired Word is the ultimate standard for what Christians believe, how they live their lives, and especially the manner in which they approach God in worship. Since worship is to God, for God, and about God, God alone has the prerogative to determine how he will be worshiped. . . .

This fourth volume of Artistic Theologian is not a themed issue, but providentially every article relates to this matter of the sufficiency and authority of God’s Word in worship.

Within the Reformed tradition, there has been considerable discussion of the question of exclusive psalmody (the belief that the Church of Jesus Christ should sing in worship only canonical psalms). There has been less discussion of the propriety of what I call “Partial Psalmody,” singing portions (or even snippets) of psalms but not in their entirety. I think we should discuss this question also, ideally with the same mutual respect and charity with which we discuss exclusive psalmody. I ordinarily object to Partial Psalmody, on grounds I will mention below. Let me say beforehand that contemporary worship music is the graver offender here. Exclusive Psalmist communions, such as The Reformed Presbyterian Church of North America (RPCNA), frequently sing partial psalms, breaking biblical psalms into several portions, and singing each of those as its own separate part of a service of worship, ordinarily to different tunes. But at least the parts of psalms they sing are larger parts, whereas in the contemporary worship music it is common to sing very small portions.

Ultimate Mystery: The Disappearance of Holy Scripture from Evangelical Worship

The Southern Baptist Convention, identified by most as the largest Protestant denomination in America, revised its confession known as The Baptist Faith and Message (BFM) in June of 2000. A blue-ribbon committee chaired by Adrian Rogers and including Richard Land, Chuck Kelley, Al Mohler, and Jerry Vines—among others—worked diligently to rid the 1963 revision of the old New Hampshire Confession of the neo-orthodox language that had infiltrated the document at several points. After one of the most interesting debates in Baptist history, lasting more than an hour, the convention approved the changes by a vote of better than 95% of the thousands of registered messengers.

Baptists in America have very strong feelings about the conditions for church membership. In this article, I want to focus on one: believer’s baptism by immersion. My current church constitution lists as a requirement for church membership baptism by immersion on repentance of sin and profession of faith. The same qualification appears in both the Philadelphia and New Hampshire confessions of faith, in Pendleton’s Baptist Church Manual, and in the Baptist Faith and Message. Indeed, many Baptists in America consider believer’s baptism by immersion to be a non-negotiable prerequisite for local church membership—but perhaps not as many as did a generation ago. Some significant Baptist churches have begun accepting members without that requirement, and that trend will certainly continue. Indeed, I broached this subject with some colleagues in Britain, and they were confused by my intention because they have nearly unanimously removed that condition from their constitutions. It is no longer a debate for them.

Implications for Worship from the Mount of Transfiguration

The Mount of Transfiguration has long been considered one of the most mysteri-ous events in the New Testament (Matt 17:1–13; Mark 9:2–13; Luke 9:28–36). Some source-critical scholars have considered it no more than a symbolic (non-historical) story created to demonstrate the Messiahship and deity of Christ. Others have believed it to be an ecstatic vision experienced either by Peter or even Christ himself. Still others have con-sidered it a misplaced resurrection narrative out of chronological order in the synoptic gospels. The reasons for attempting to explain away the miraculous nature of this event are predictable, though still unnecessary.

Music, Culture, and Vain Repetition: Matthew 6 in its Context

There are many different views on the relationship between church and culture. One extreme believes that the church should look nothing like culture and operate as a counter-cultural movement. This view tends to accuse recent worship music of being guilty of vain repetition, which Jesus condemns in Matthew 6:7. However, this view often does not want a counter-cultural church, but rather a church that preserves the culture of a previous generation instead of embracing the culture of the current one. What pastor hasn’t heard questions and statements such as “Why are we singing that 7/11 chorus (a chorus with 7 words sung 11 times)? Why are we singing this new song with these new instruments? It causes us to look like the world! What’s wrong with our old hymns?”

“A Credobaptist Defense for Including Children in Corporate Worship through a Biblically Appropriate Application of Developmental Psychology” by Robert Brian Pendergraft, PhD

Echoes of Eden: Reflections on Christianity, Literature, and the Arts
Jerram Barrs

Praying and Believing in Early Christianity: The Interplay between Christian Worship and Doctrine
Maxwell E. Johnson

God Dwells among Us: Expanding Eden to the Ends of the Earth
G. K. Beale and Mitchell Kim

From Whom No Secrets Are Hid: Introducing the Psalms
Walter Brueggemann

By the Waters of Babylon: Worship in a Post-Christian Culture
Scott Aniol

The God We Worship: An Exploration of Liturgical Theology
Nicholas Wolterstorff