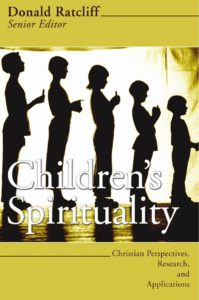 In recent years there has been a surge of interest in children’s spirituality. A flurry of research, literature, and conferences on children’s spiritual formation abound. More than simply a second edition, this book is a reworking of the published presentations from the preliminary conference of the Society of Children’s Spirituality: Christian Perspectives (2003), now called the Children’s Spirituality Summit. Edited by two founding members of the society—Kevin E. Lawson and Scottie May—this 2019 publication includes new insights on children’s spirituality. For example, chapter ten on the brain and child development has been expanded to include the most current research.

The book is divided into five main sections—the first devoted to research, history, and theology. The subsequent sections look at children’s spirituality in the contexts of the church, home, and school, concluding with a reflection on the conference as a whole. While the goal of the conference was to examine research pertaining to the spiritual experiences of children within a Christian worldview, due to the newness of this field of study, the definition of “spirituality” is intentionally “left open-ended” in the book (2). It would not be until a later conference that a working definition would be adopted by the society.[1] However, from the outset their purpose, as described by May, was built on a clear premise that “children are just as much spiritual beings as are the adults in their lives” (1).

While the first chapter gives a good overview of the book, if one is new to the field of children’s spirituality, chapter six by Rebecca Nye might be a good place to start. A developmental psychologist from the UK, Nye is well known for her theory of relational consciousness.[2] She defines “relational consciousness” as a means in which a child not only becomes aware of their own consciousness but also “exudes a capacity for conscious relationship” (87). Making the switch from studying children’s cognitive abilities, she became intrigued with the essence of their spiritual nature. Somehow, even if children did not yet possess the reasoning or language capabilities needed to communicate in the sphere of religious instruction, they seemed to intuit a godly sense. How exactly was this possible? Enter the field of children’s spirituality.

Related:  The Presence of God: Its Place in the Storyline of Scripture and the Story of Our Lives

Nye points out that research from the previous century had yielded “watered down” religious training since children’s cognitive abilities were known to be limited. It was therefore assumed that so were their spiritual insights (86). Children are, after all, quite literal. She writes,

On one level their conventionally religious reasoning was bootstrapped to their cognitive development, but seeing past this surface layer there was much more going on that suggested profound engagement and motivation, and in an important sense a kind of spiritual maturity which adults often merely feign. (87)

Along with Nye’s notion of “relational consciousness” is Jerome Berryman’s concept of “silence” in chapter two. Before language takes place, a child relies heavily on non-verbal cues—such as touch, tone, and body language. A problem not only in communication but also in development can occur if these non-verbal cues are out of sync with the language concepts that the child is learning—a child’s emotional intelligence can become stunted. Berryman carries this disjunct syllogism into the spiritual realm and posits that as an adult, one may or may not always intuit non-verbally what he or she communicates verbally as a Christian. In other words, does one walk the talk or just talk the talk? For example, “T. S. Eliot observed that the reason so much Christian poetry is of poor quality is that the authors wrote what they thought they ought to write instead of what they actually experienced” (23–24). How can the verbal and non-verbal be bridged? Berryman reports that the poetic nature of Scripture gives an answer: “The Christian language system is a complex repository of such ‘poetry.’ There are sacred stories, parables, and liturgical gestures combined with words in addition to silence in this linguistic domain” (25).

Related:  Sabbath and Sunday among the Earliest Christians, by David W. T. Brattston

Klaus Issler offers insight in chapter four of how to “connect some of the theological dots” pertaining to the spiritual condition of children (49). Issler advocates a “before and after” approach to children’s ministry, “nurturing the faith of children through corporate practices offered both before and after children reach an age of discernment” (48, emphasis original). Worshiping corporately is an ideal way for the child to receive both religious educational training and spiritual formation. Other chapters, such as “A Child’s Concept of God” offer intriguing insights as well.

For the average children’s ministry leader, the field of children’s spirituality may sound nebulous and perplexing. While Berryman cautions against using religious language void of spiritual experience, Nye likewise warns against talking about spirituality without using religious language—“at some point psycho-babble could become a replacement for sacred-ese” (94). Berryman points to the power of poetry to communicate “what is silent in human relationships,” but acknowledges that “the use of reason, logic, and tradition are needed to guard this language system against misuse” (25). Furthermore, the means of utilizing empirical research to study something “spiritual” is inherently problematic. Nye herself admits that while qualitative social science has “promise” as a Christian method, “truth and knowledge” may be viewed more as “affected by context and subjectivity” instead of “objective facts” (100). She therefore rightly advises Christians to view the developing research on children’s spirituality in tandem with “historical, theological, and educational enquiries” (100).

Related:  Worship in the Way of the Cross: Leading Worship for the Sake of Others