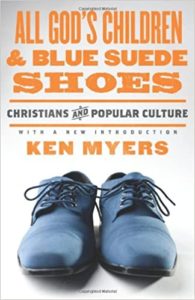 In a postmodern culture built upon the shifting sands of subjectivity and popularity, the Church is called to offer a distinct way of life founded upon unchanging truth. Ken Myers, host of the Mars Hill Audio Journal and former editor of This World: A Journal of Religion and Public Life, wrote All God’s Children and Blue Suede Shoes to explore “the nature of popular culture in relation to other aspects of creation and especially in relation to the history of American culture and society.” (180). Through eleven cleverly-rendered chapters, Myers argues that the form of cultural expression greatly impacts the understanding of its content, and in many cases, literally is the content (xi). Put simply, popular culture influences how people think and feel more than what they think and feel (Introduction, 13).

Myers affirms that the Church must simultaneously withstand and combat the pressures within a distracted and disordered society and “engage the culture by being a culture.” (xviii). For the Church to be its own culture requires traditions that are passed down to each generation, based upon a “rich theology” and biblically sound worship practices—the formation of a “sacred canopy of publicly professed faith.” (63). The author explains further that the vices of popular culture, (including an insistence upon the immediate, an avoidance of depth and transcendence, and the autonomous elevation of self), present challenges and temptations to the Church that cloud its vision and hinder its mission. If the Church incorporates elements of popular culture (such as music) that are merely “sanitized” with Christian language, Myers maintains that these borrowed cultural forms “effectively cancel out” the message being communicated (18, 20).

Related:  Praying and Believing in Early Christianity: The Interplay between Christian Worship and Doctrine

The author also expounds upon God’s original intentions for culture—that it was created to be “a fulfillment of the image of God, an imitation of God.” (39). Before the fall, no division or “shadow” existed between culture and devotion (42). Afterwards, the “blissful blend of work and worship” enjoyed in Eden vanished, and the cultural activities of human beings began to include acts of reckless disobedience (44–45). Myers notes that this condition will be rectified only in the eschaton; accordingly, Christians are not called to “sanctify” a culture shared by both believers and non-believers alike, but rather to influence it with minds and hearts sincerely “set on the things that are above.” (51).

Myers then traces the historical development of popular culture, describing how it materialized in the nineteenth century and gradually overshadowed traditional folk culture, resulting in the emotional intensities of Romanticism and sentimentalism. He details further the way in which industrialism, modernism, the era of the 1960s, and the advent of rock music and television came to dominate and define the avenues of popular culture—avenues that have been largely embraced (rather than critiqued) by the Church.

Myers’s thorough yet concise volume effectively communicates his argument that the forms of cultural expression not only highly impact the perception of its content, they often become the content. The book’s highly philosophical yet approachable literary style makes it very useful for a classroom setting as well as for a church study group. The message of Ken Myers for present-day Christians is to engage with society without forsaking biblical principles—to refuse to be “dominated by the sensibility of popular culture” or “captivated by its idols.” (180).

Related:  Worship & Mission after Christendom by Alan and Eleanor Kreider