Sabbath and Sunday among the Earliest Christians, by David W. T. Brattston 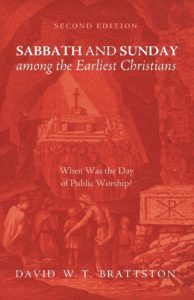 “A method that can prove anything proves nothing” (52). David W. T. Brattston, retired lawyer and judge who authored Sabbath and Sunday among the Earliest Christians, said this of the Sabbatarian position, which he shows is built upon a faulty method of research. Brattston sets out to evaluate every reference to the day of worship found in the approximately five hundred Christian documents dated prior to the mass apostacy of AD 249–251. To substantiate his case, he shows the unanimity in early Christian literature and the fervency of early Christian for Lord’s Day meetings. He concludes his work by addressing the arguments of present-day Sabbatarian. Employing his exemplary approach to research, he concludes that “the earliest Christian literature . . . is unanimous that the main day of the week for early Christians to gather and worship was not the seventh-day Sabbath, but Sunday” (3).

While Lord’s Day gatherings described in Scripture may be descriptive in form (Acts 20:7, 1 Cor 16:2, Rev 1:10), the earliest Christians understood them to be prescriptive. After describing a first-century worship service in detail, Justin Martyr (AD 100–165) gives this rationale: “Sunday is the day on which we all hold our common assembly, because it is the first day on which God, having wrought a change in the darkness and matter, made the world; and Jesus Christ our Savior on the same day rose from the dead” (3–4).

Present-day Sabbatarians claim that “the Lord’s Day” in Revelation 1:10 is something more like “the Day of the Lord,” which is used to speak of a day of judgement, but Brattston swiftly dispels this argument by citing the late second-century work, The Acts of Peter, which equates “the Lord’s Day” with Sunday: “On the first day of the week, that is, on the Lord’s day, a multitude gathered together” (4–5). After examining the approximately 500 documents available to modern scholarship from this time period, the author concludes that “the chief day of the Christian week, even before the middle of the third century, was Sunday . . . . There is no extant record of it being on Saturday” (6).

Related:  The Temple and the Tabernacle: A Study of God’s Dwelling Places from Genesis to Revelation

Prominent early Christian voices also believed that Jesus abolished the Sabbath. Justin described the Jewish sabbaths as “utterly ridiculous,” “unworthy of notice,” and “superstition” (9). By the third century, Tertullian taught a form of Sabbath-keeping, but as Brattston points out, Tertullian maintained this practice in addition to keeping the Lord’s Day. A major debate during this time, before the start of the Decian Persecution, concerned how the Lord’s Day should be kept, specifically whether the New Covenant permitted work on the Lord’s Day (9–14). The author shows how Justin, Tertullian, and others weighed in on this topic, yet none advocated for a chief gathering on the seventh day.

Using the history laid out in the early chapters as his basis, Brattston addresses the arguments of present-day Sabbatarians. Brattston has this to say about Samuele Bacchiocchi (1938–2008), author of From Sabbath to Sunday (Pontifical Gregorian University Press, 1985): “Professor Bacchiocchi quotes or cites a hodgepodge of authors so wide and varied and from so many time periods that any proposition at all can be proved by this method; my comment is that a method that can prove anything proves nothing” (52). The primary point promulgated by modern Sabbatarians is that the earliest believers originally worshipped on the seventh day, but then because of intense persecution against the Jews, these Christians gathered out of necessity on Sunday to differentiate themselves from the persecution. Brattston shows that this theory has no historical support. The main event that Sabbatarians identify is the Hadrianic Persecution of AD 132 to 135. Brattston’s most convincing argument is based on the extent of the persecution—for such a persecution to have a far-reaching impact it would need to be widespread, intense, and long-lasting. Brattston concludes that this persecution, although intense, was confined mainly to Judea for just a few years (32–50).

Brattston’s commitment to identifying the best sources from history is the greatest strength of this book. In this relatively short volume, the author imparts an approach to historical research that every student of theology should heed: “In Christianity today, too many people allege that an apostolic or other early state of affairs had existed, without substantiation from original contemporary sources. All teaching and practice must be affirmatively proved from the best evidence available” (27). Brattston’s interaction with the Talmud and other Jewish sources is especially helpful for understanding the motivations of Christians during this time by understanding Jewish thought (see chapter 11). This work would be strengthened if it rooted the case for modern-day perpetuation of worship practices in the New Testament text, rather than this case being made from just the practice of the early church. A subject that needs more substantiation and would make for an interesting research topic is the earlier church’s view of rest on the Lord’s Day (see chapters 4 and 15). Brattston concludes that early Christians “performed secular tasks without conscientious objection” on Sundays (58).

David Brattston presents his case with the precision of a lawyer, the fairmindedness of a judge, and the astuteness of a historian. I recommended this book as the starting place for this topic. This resource—and the author’s approach—is an exemplary model for the pastor, layperson, student, and scholar.