Art in Action: Toward a Christian Aesthetic | Nicholas Wolterstorff 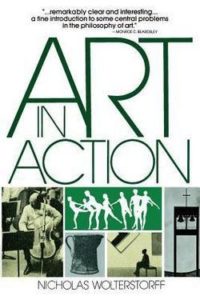 Nicholas Wolterstorff, the Noah Porter Emeritus Professor of Philosophical Theology at Yale University, confronts the common trends in aesthetics in 1980 with his engaging Art in Action. This work is a simplification of his more academic treatise, Works and Worlds of Art. Even so, the ideas about art Wolterstorff tackles require a modicum of familiarity with terminology and discourse on the subject in providing a Christian alternative to modernist aesthetics.

Wolterstorff attempts to address what he sees as a critical problem in thought about art, namely, an aestheticism that understands the consumption of art as a passive contemplative experience. He views this perspective as a result of modernism, which saw art as a way to save mankind from mere rationality. Relegating the experience of art to one of mere contemplation, Wolterstorff argues, divorces art from the rest of life, elevates the artist above the rest of humanity, and promotes an aestheticism without true responsibility.

Instead, Wolterstorff argues that art does more than offer contemplative experience; instead of thinking merely about the art itself, he suggests that “works of art are instruments and objects of action—and then, of an enormous diversity of actions” (x), only one of which is aesthetic contemplation. The status quo in the arts community today, he believes, is to consider such “functional art” as inferior to art “for its own sake.” On the contrary, Wolterstorff believes that we must consider the variety of ways in which art fits into human life, and having noticed the diversity, to honor the diversity. His goal is to urge his fellow Christians to engage in the arts, not on the terms of the contemporary Western way of thinking about the arts, but rather through a more Christian framework of art as servant to human action, for “the purposes of art are the purposes of life” (4).

Wolterstorff begins his argument by illustrating the various ways art serves action in the real world, thus disproving an exclusive purpose of disinterested contemplation. He then proceeds with an elaborate explanation of the idea of action, an explanation that serves as the undergirding to future structures in his thesis. In contrast to his ideas about the purposes of art, high culture today, he suggests, is centered in academia, having “close ties to our intellectual elite” (23). It is meant only for those with leisure time, which stands in contrast to pre-Enlightenment society in which “it was principally works of liturgical art that constituted the works of the tribe” (23). This had created what Wolterstorff views as a significant problem for Christian artists today: “Thus works of art become surrogate gods, taking the place of God the Creator” (50).

Wolterstorff’s solution to this problem is to insist that human creativity does not imitate God’s act of creation, but rather reflects the human role of a responsible, creative members of the creation. This removes the elitist status and makes an artist an obedient, humble servant. The artist, in this view, seeks to master his medium by “projecting a world” that is “fitting” for the context at hand. This, Wolterstorff argues, “is perhaps the most pervasive and important of the actions that artists perform by means of their artifacts” (122). The artist thus sees himself as responsible to create an artifact that “serves well the purposes for which it was made or distributed,” and this is what defines it as possessing “artistic excellence” (157). One such purpose may indeed be contemplation for aesthetic delight, in his view, but there are also other legitimate purposes for art. This does not discount the importance of aesthetics in art, but rather relegates aesthetics delight as but one component in service to another purpose, as with hymns, where “art in the liturgy is at the service of the liturgy (184). It is only with this perspective that the Christian artist can rightly participate in the modern institution of high art and perhaps even rise above it.

As has become evident in Wolterstorff’s more recent writing and speaking, Art in Action was an early attempt to confront a secular view of aesthetics. Nevertheless, Wolterstorff’s argument resonates with real life. Amidst the technical philosophical discussion emerges an idea that simply feels true: often art exists, not merely for its own sake or for “aesthetic contemplation,” but for the sake of human life. Whether works songs, folk culture, or liturgical arts, it appears self-evident that art, in Wolterstorff’s words, is simply “man’s way of acting in the world” (5) rather than something to merely contemplate. One of those acts may be disinterested contemplation, but more often the art serves a function. Upon this recognition, elitism melts away, and a Christian can now engage the arts as a servant of his various purposes in God’s world.

Yet in his reaction against the standard purpose of art as only aesthetic contemplation, Wolterstorff seems to create the reverse problem of relegating the idea of disinterested pleasure in art as somehow inferior to its utilitarian function. This strips art of what may be its most fundamental quality, thus unintentionally denigrating it as little more than life’s decoration; art has no unique purpose, it has no intrinsic worth, and instead its value is found only in its instrumental existence. The idea that art serves human acts does indeed seem to “feel” correct, but Wolterstorff never fully explains why this is so; why does man universally create art to accompany action? Even more specific to Wolterstorff’s underlying concern, why have Christians almost universally utilized art in worship? Perhaps it is exactly because of art’s potent ability to elicit a satisfaction that is not rooted at all in a utilitarian function, a delight that resembles and therefore heightens the act of worship itself. Perhaps this is exactly why post-Enlightenment aesthetics replaced religion in the first place.

Related:  Jesus and the Jewish Roots of the Eucharist: Unlocking the Secrets of the Last Supper

Nevertheless, what Wolterstorff provides is an enlightening introduction to a Christian aesthetic that breaks free from a purely secular view of the arts, and instead provides us a way to humble the artist as creator in service of the Creator of art.