Plays Well With Others – #2 “How Are You Playing That?” 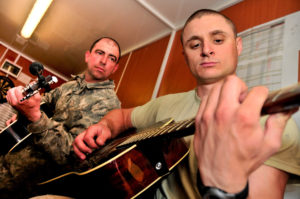 “In those days there was no king in Israel, but every man did that which was right in his own eyes.” Judges 17:6

Intros, turnarounds, and endings may be the ugliest part of the performance of any worship song. This is a place where all musicians are isolated to do “what is right in his own eyes.” This may clash with other musicians. In fact, unchecked, it most likely will.

The fix to this perennial problem is so simple, you will be amazed you didn’t think of it sooner. It reveals itself in the form of a simple question, “How are you playing that?” As the leader you should typically dictate the open and close of the song, but it is the turnaround that gives this question such power. Allow me to illustrate.

After the chorus in rehearsal, you listen to the turnaround. In the rhythm instruments, you hear three or four different methods of playing the ubiquitous progression of I-IV-V-I. However, let’s say that the guitarist is playing a rhythm that you find exceptionally pleasing, and fitting. You cut them off into the next verse, and you point to the guitarist and you ask…

“How are you playing that?”

You then have the guitarist, again for the sake of this narrative, play it. You hear the rhythm, and you ask your drummer to match it, then keys, and bass. All of the sudden you have rewarded good playing, built listening skills, created a clean turnaround, and your prize pupil, the guitarist in this example, has “skin in the game” in the musical performance. Just by asking the simple question, “How are you playing that?”

Related:  Beyond Contemporary vs. Traditional

Understand, you will have to follow that up in your soundcheck right before the service in saying, “Hey let’s play that turnaround again remembering how [insert guitarist’s name here] played it.

Playing well with others requires all of us to hop in the follower part of follow the leader from time to time. As long as we get our turn, things can go very well. So take time in your rehearsal and ask that very important question, “How are you playing that?”