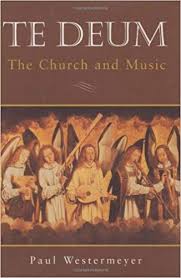 A fuller knowledge of present-day church music requires an understanding not only of its historical development but also the theological contexts that house it. Paul Westermeyer, Emeritus Professor of Church Music at Luther Seminary in St. Paul, Minnesota and an ordained pastor in the Evangelical Lutheran Church in America, wrote Te Deum: The Church and Music as a “theology of music” whose main concern is the “song of the people” and what “stands behind it.” (xii–xiii). Through a sweeping survey of congregational singing from the Old Testament through the twentieth century, Westermeyer asserts that biblical, theological, and liturgical elements are crucial components in the historical development of church music and its ongoing practices.

Westermeyer provides philosophical insights into why people sing, noting that it binds together a community of faith whose “language of joy and praise is the language of song.” (28). As language proceeds from prose to poetry to song, the author describes the “continuum of increasing transcendence” between spoken language and musical speech (29, note 24). Because the faith of a community finds its voice and “comes to life in its music-making,” music becomes central to its identity, thereby introducing tension and the potential for conflict (5).

The foundation of Westermeyer’s volume is properly laid through a discussion of the role of music in both the Old and New Testaments. For the people of Ancient Israel, music was “functional” and served a “utilitarian purpose,” such as the signaling call of the shofar (10). The author aptly notes that the Hebrews also began to celebrate God’s victorious actions in their midst with festivals that told the story with music. J.S. Bach once said that the whole foundation of church music is based upon the language of Israel’s praise, “You are blessed, O God because you have done…” (14). Westermeyer places great emphasis upon the importance of the Psalms, rightly stating that they are simultaneously “the songs of Israel and voice of the church” (23).

The author’s discussion of New Testament worship centers around canticles, which are portions of biblical texts that are sung in celebration of God’s deliverance, such as the Magnificat (Luke 1:46–55) and the Nunc Dimittis (Luke 2:29–32). While indicating that the music of the early church at first reflected Jewish synagogue practices, Westermeyer also provides a discussion of who Christ is, what he did, and how this affects the ecclesiology and eschatology of the church.

Westermeyer’s discussion of the Reformation also provides helpful theological synthesis and musical observations. He details the theological movement away from “the notion that one could gain God’s favor by doing something” in favor of a full understanding of the message of Scripture: that “humanity is justified by grace through faith.” (141). The author explains that while the Reformers shared many points of agreement, they held differing views of music: “Luther recovered the congregation’s singing, Zwingli denied it, and Calvin restricted it,” viewpoints that the author effectively parallels with the views of early church fathers Ambrose, Pambo, and Augustine.

Westermeyer’s volume extends to discuss such topics as the explosion of hymnody and hymnal publication in the eighteenth century, the rise of revivalism in the nineteenth, and the contributions of the Oxford Movement and African American Congregational song. Amidst such a wide range of topics, the author says the uniting theme in the church’s song is that all creation is moving toward the praise of God and that “what matters most” is the glorification of God (25).

Stating that this book was designed as an “introductory” volume meant to convey the importance of the church’s theology, liturgy, and understanding of Scripture in the development of church music, Westermeyer also provides the reader with a detailed chronological timeline of events, an ample bibliography, and extensive, thoroughly-researched footnotes. He envisions the book to be useful to music students in a hymnology or music history class, to pastors and church musicians, and for any Christian who seeks a greater understanding. The author closes the book with a hopeful message—that “God has sustained the singing in spite of our conflicts” and that the song of the church is continually offered “in praise to the Father, Son, and Holy Spirit from age to age and forever.” (320).

Related:  The Benedict Option: A Strategy for Christians in a Post-Christian Nation