The Anatomy of Hymnody by Austin Lovelace 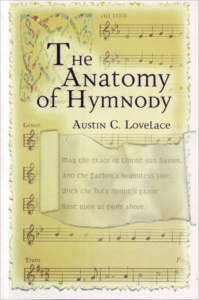 To meaningfully approach the spiritual nature or “soul” of a hymn requires a masterful comprehension of the structural components that house its meaning. Austin C. Lovelace (1919–2010), who taught at Union Theological Seminary in New York City and came to be known as “the Dean of American Church Music,” wrote The Anatomy of Hymnody as a handbook of hymnic poetic structure that would ultimately lead the reader to correctly perceive hymns as “man’s response to God.” (7). Through seven informative chapters, Lovelace argues that an interconnected relationship exists between hymnic “meter, matter and music” and that any hymn should contain both good rhyme and reason (Introduction, 3).

Lovelace defines a hymn as “a poetic statement of a personal religious encounter or insight, universal in its truth, and suitable for corporate expression when sung in stanzas to a hymn tune.” (5). The author insists that the purpose of a hymn is not intended to delight a congregation or to create a “religious mood.” (6). Rather, just as a human body has a skeleton that creates its structure, the framework or “anatomy” of hymnody houses and reveals its deeper nature and meaning.

In addition to effectively defining basic metrical terms such as poetic feet (a grouping of two or more accented and unaccented syllables), Lovelace proposes that the various hymnic meters should be chosen in accordance with the character of the text. For example, iambic patterns that contain an “upbeat followed by an accent” are “stately and noble” and appropriate for texts of “exposition” and elucidation. Trochaic patterns are the metrical opposite of iambic and are “used where directness of thought and excitement are desirable.” (13).

Related:  Drinking from the Wells of New Creation: The Holy Spirit and the Imagination in Reconciliation

The bulk of Lovelace’s work provides a detailed discussion of hymns throughout history that fall into the basic metrical categories of iambic, trochaic, dactylic and anapaestic, and those that display mixed meters. Lovelace also provides ample numbers of well-chosen hymn stanzas that clearly illustrate his metrical analysis and discussion. The author also makes abundantly clear the importance of well-written poetic rhyme, which “at its best stimulates the imagination” and “at its worst degenerates into doggerel.” (17).

In the final chapter before the conclusion, Lovelace provides a valuable summation of twenty-eight poetic devices that are frequently encountered in hymnody. In addition to outlining familiar devices such as allegory, metaphor, and paradox, Lovelace also defines such terms as hypotyposis (intense descriptions that bring clear imagery to mind), echphonesis (using an exclamation mark for emphasis) and tautology (repeatedly expressing the same concept in different words). Whereas the metrical characteristics of a hymn reveal its skeletal structure, poetic devices “frame the sinews and muscles and determine shape and form.” (103).

In this concise and highly effective volume, Lovelace makes the compelling argument that the metrical structure, subject matter, and tune of a hymn are closely interrelated and reveal its overall nature. Without this understanding, Lovelace warns that “our worship will be vain before God.” Additionally, the author persuasively conveys to his readers that poetry’s various techniques need to be “so developed that God’s Spirit can flow through the mind, heart, and hand of a poet-Christian who must sing of God’s grace.” The universal appeal and importance of this topic make this book a must-read for pastors, church musicians, and church members alike, especially since poetry, says Lovelace, “is the handmaid of Piety.” (104).